Movement Across the Curriculum 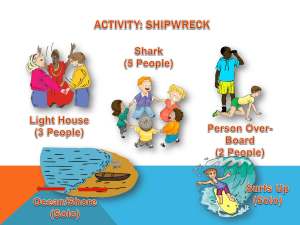 This game is a great grouping strategy.  You can use it as a brain break, 5 minutes of movement doing the different commands.  End the game in the group configuration you want them in to begin the next activity.

It can also be used to reinforce vocabulary within a variety of concepts. Below are examples of “shipwreck” like activities. Classroom teachers can use this idea for grouping as well as a 5 minute movement break.

Explain the 5 different groupings and what they mean, to the children.  Introduce one at a time and then let them practice.  I usually start with Ocean/Shore.  That way they get moving right away and then I mix that in with the next configuration.  Surf’s up is usually second because it also get the class to freeze. 🙂

After they have learned and practiced all the commands, begin playing the game.  The objective it to try to be in a group with everyone at least once during the game.  Speed makes the game more fun, but in the beginning, I encourage them to all get in a group.

You can make any kind of configuration you want to make different groupings.  we use “Raft” to get groups of four.  Four people laying on their stomach making a square raft.

Use this video to show give your visual learners an example.

Have students place a traffic cone upright on the floor in own spaces around the general space. Prompt them to keep cones away from wall and center (meeting circle) area. To begin the activity, review the different directions (Forward, Backward and Sideways) they can move; while walking, jog/running, hoping, skipping, sliding, traveling on bottom, etc.). Explain that you will be rolling the die you have in your hand. They will all call out the number together, and then they can go and travel using the direction that is determined, to move to that number (the number of the dice) of cones. They should touch the top of each cone they come to; when they are done, they then perform the movement back to the center circle. Change the direction you call out. You can also have students roll the die. Encourage the students to find many ways of traveling using the different directions.

Adaptations for Students with Disabilities:

Travel/Stop with emphasis on Directions (Forward, Backward and Sideways)

This movement activity provides almost 4 minutes of organized movement.  Use this video to practice the three Directions; traveling forward, backward and sideways.  The music plays with the surface of the body that represents the direction to travel, up on the screen.  When the music stops, the stop sign pops up, and the children should stop and look for the next direction to use when the music begins again!  The new direction will show up 5 seconds before the music starts again.  Make sure the children wait to travel until the music begins again.  Use the 5 seconds to talk about how the students might travel in the new direction.

You can travel through the children as they move, making sure they are traveling in the correct direction.  You can also use that time to point out the different body parts that are leading as the children travel!

This is also a wonderful formative assessment tool for assessing the Head Start Outcome;

Gross Motor Skills – The control of large muscles for movement, navigation, and balance.

Clean Up – Mess Up

This is a fun game that practices moving to and from the boundaries, while practicing cleaning up; with little fun messing up in between!  During the game you can also introduce Sorting; putting the garbage away according to color or type.

Begin with the yarn balls or bean bags, or both, spread out around inside the boundaries.  the game begins with everyone picking up the “garbage”, one at a time, and putting it on a vinyl spot.  The intention is to practice moving to the boundaries, and not beyond them.  this also helps the children identify and become familiar with where the boundaries are.

Once the area is clean, ask the children to mess up the space by putting the garbage back into the space.  If you are using bean bags, it’s good to work on putting the bean bag or yarn ball inside the boundaries “safely”.  Making sure to put it where no person is.  If you say, “don’t throw it”, you are creating your own reality, which is what I did in the video and you can see that they definitely throw the stuff.  Talking privately with the children who are not being safe, ie: throwing the stuff, will work better to curb throwing.  If necessary, ask the child who insists on throwing to sit out by a cone and watch for one turn.  While they are sitting out, be sure to talk with them, asking if they are willing to play the game safely?  If they agree, get them back into the activity as quickly as possible.

The video is a short clip of me explaining the game and the children playing.

The video is intentionally blurred to mask the features of the children.

Pete the Cat goes for a Walk

After reading the story “Pete the Cat; I Love My White Shoes” and teaching the concept of “Walking” I used this video to practice walking, color identification, empathy and listening.  It’s the author and a musician, reading and enacting the story. You can also see it on YouTube @ http://www.youtube.com/watch?v=nUubMSfIs-U

Anytime the story is being read, or the song is being sung, everybody walks around the room.  When Pete steps in the various puddles and piles of stuff, we all stop and say “Oh No” and then when Pete starts singing and walking again, so do we!

This movement activity that will provide 10 minutes of movement time!  The PowerPoint presentation provides visual and audio cues for your children to listen to and watch for as they travel through the classroom when the music plays, and put the identified body part on the vinyl spot when the music stops!  Listening skills and body part identification are among the many skills and concepts being practiced.  Use the time that the children are putting the body part on the vinyl spot to formatively assess the children’s ability to identify and locate the correct body part.